MKR is a cryptocurrency depicted as a smart contract platform and works alongside the Dai coin and aims to act as a hedge currency that provides traders with a stable alternative to the majority of coins currently available on the market. Maker offers a transparent stablecoin system that is fully inspectable on the Ethereum blockchain. Founded almost three years ago, MakerDao is lead by Rune Christensen, its CEO and founder. Maker’s MKR coin is a recent entrant to the market and is not a well known project. However, after today it will be known by many more people after blowing up 40% and it is one of the coins to rise to prominence during the recent peaks and troughs.

After being developed by the MakerDAO team, Maker Dai officially went live on December 18th, 2017. Dai is a price stable coin that is s... 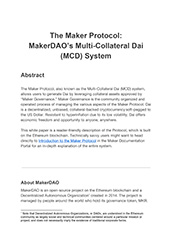